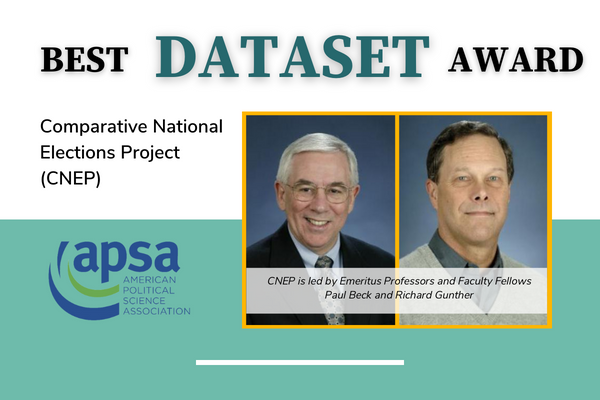 CNEP is a partnership among scholars who have conducted election surveys across many of the world's democracies and several non-democracies holding elections. CNEP merges the common core questions from individual surveys into a single file of 346 variables, which is especially valuable in facilitating comparative analyses.  Over 60 surveys, both individually and merged, are available to all CNEP partners and all but recent surveys are open to use by the scholarly community, over 150 of whom have registered on the CNEP website (u.osu.edu/cnep).

“It is an honor to have CNEP receive this award in recognition of this valuable data resource for scholars dealing with electoral behavior around the world,” said CNEP Co-organizer Richard Gunther. “Having the leading professional association in political science commend the program further enhances the visibility of this unique interdisciplinary international project.”

Founded in the late 1980s, the program is currently coordinated by Emeritus Professors and Mershon Faculty Fellows Paul Beck and Richard Gunther. To date, the project includes 62 national surveys and 103,601 survey respondents, with anticipation of additional data from election studies recently conducted in Chile and Germany.

As the project has evolved over time, new question modules have been added to capture important aspects of elections and democratic support in the new member countries. Recent surveys, for example, have contained questions on support for democracy, the rise of populism, "fake news," and the rapidly evolving impact of the internet.

As for the future, Beck reports that funding is in place to add a survey for the October 2022 Brazilian election, which will add a valuable case for comparative analysis.

The Lijphart/Przeworski/Verba award will be presented to CNEP at the APSA’s Comparative Politics section annual meeting in Montreal this September.

Named after the political scientists Arend Lijphart, Adam Przeworski and Sidney Verba, the award is a significant achievement for everyone involved with the CNEP.

The selection committee for the award was formed of Dan Slater (University of Michigan), Jacob Nyrup (University of Oslo) and Nirvikar Jassal (Stanford University).