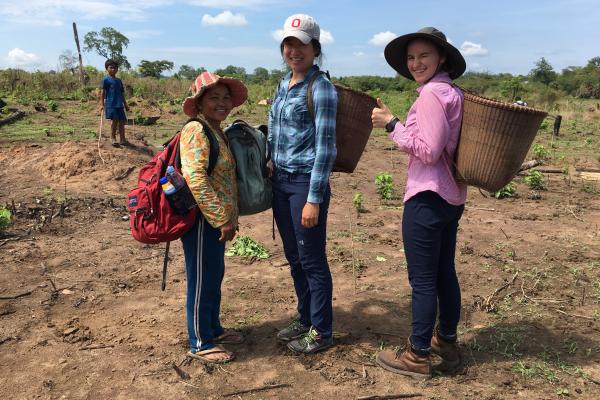 The Vietnam War may have ended over four decades ago, but one unlikely population is still dealing with the effects of the war today… Cambodian farmers.

Mershon Center Faculty Fellow Erin Lin recently published an article in the American Journal of Political Science detailing her research into the U.S. bombing of Cambodia during the Vietnam War and its impact today for Cambodian farmers’ agricultural output and economic response.

The Mershon Center sponsored Lin’s travel to Cambodia to collect first-hand accounts from affected farmers and the unconventional practices they must rely on in order to stay safe on their own land.

“By the time I finished graduate school, my dissertation provided an economic history of the bombing, technological failure, and its consequences on Cambodian farmers—very much in a removed, large-N, aggregate sense,” said Lin. “But as a social history, my account was lacking; I wanted to speak to farmers, and let their accounts speak for themselves. For this reason, I appreciate how Mershon funded this trip, so I could return to the field and learn the human history that has developed around these leftover bombs from the Vietnam War.”

Lin’s article is part of a larger project she’s working on that will eventually become a book. To learn more about Lin and he research, click here.