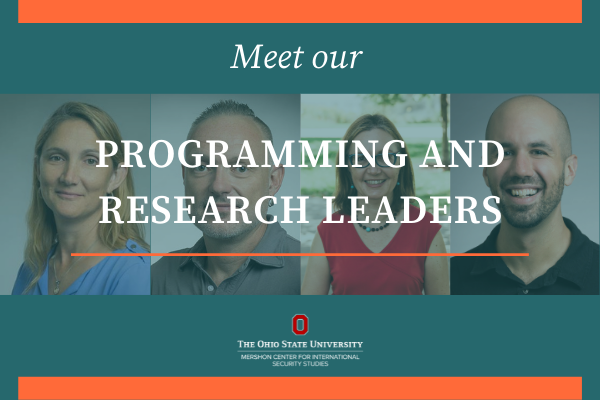 We are pleased to announce the Mershon Center’s new Programming and Research Leaders:

These pairs of scholars will be developing creative programming for the upcoming academic year around their thematic areas.

Peripheries and Centers | Theodora and Eric

This thematic area prioritizes perspectives from the periphery. It focuses on regions, countries, communities, and individuals who have been typically marginalized in global discussions about international, national, and human security. As evident from recent events in Afghanistan, Belarus, Bosnia, Botswana, Brazil, Kazakhstan, South Africa, Turkey, and Ukraine, among others, states and actors who are typically perceived as peripheral international players hold a critical role in how the global security order is shaped.

Similarly, at the national and sub-national levels, long-marginalized communities are reshaping both human and national security through social movements and increasingly innovative forms of advocacy and mobilization. From political crises, terrorist threats, environmental cataclysms, migration dynamics, and polarized responses to contentious social issues, to sustainable innovations and creative partnerships aimed at tackling these pressing problems, peripheral perspectives and their cutting-edge research interpretations are indispensable in discussions and solutions related to security at all levels.

What you can expect

This thematic area will bring together social science and humanistic methodologies to create a robust conversation at Ohio State and beyond about how to imagine, interpret, and manage key security concerns around the globe, building on insight from and about allegedly peripheral state and non-state actors.  Activities include regular working group meetings, a speaker series, graduate student funding opportunities, and a culminating symposium.

The Legal Geopolitics of the Ocean | Kendra and Mat

This area’s programming will explore how states territorialize oceans as quasi-legal jurisdictions by exporting military, regulatory, logistics, customs, immigration, and law enforcement operations offshore, and by building extraterritorial maritime infrastructures such as islands, platforms, and naval bases. Kendra and Mat hope to problematize a common misperception of oceans as ‘outlaw spaces’, and instead explore how the world’s oceans have been claimed and practiced by states as spheres of legal and geopolitical influence.

What you can expect

The programming on the ‘legal geopolitics of the ocean’ for Mershon will comprise three activities: a Zoom-based colloquium series featuring leading and emerging scholars from across the social sciences, physical sciences, humanities, and law; an on-campus book club, running parallel to the colloquium series, and showcasing work by the invited speakers; and an in-person mini-conference, featuring invited speakers as well as book club participants, to close off the programming period.