Mershon co-hosts conference on Comics, Security, and the American Mission

Mershon co-hosts conference on Comics, Security, and the American Mission 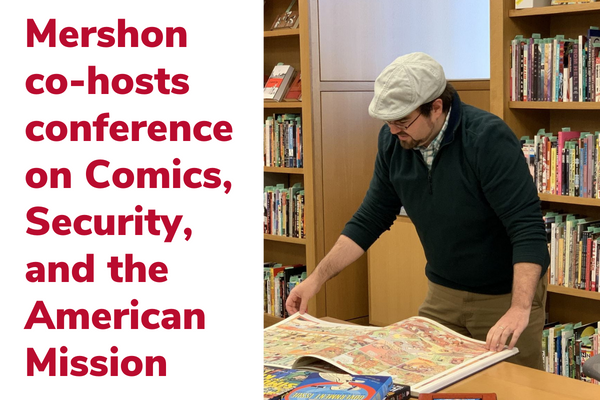 On November 3rd-4th, the Mershon Center hosted the Comics, Security, and the American Mission Conference in conjunction with the Billy Ireland Cartoon Library and Museum, The History Department, and the East Asian Studies Center. Its goal was to explore the rarely considered relationship between one of the nation’s great media and the popular narratives that underlay American wars and foreign affairs. Since 1939, comic books have been persistently popular with both children and adults, and the heroes they popularized provide foundational ideas of good and evil for many readers. The result is a uniquely powerful medium for understanding key assumptions about U.S. identity, the country’s role in the world, and the rhetoric of foreign policy.

The conference revealed that comics have been a vital element of U.S. propaganda that emerged in lockstep with the national’s expanding global power. Paul Hirsch, author of Pulp Empire, provided a keynote that highlighted how the government directly intervened to shape four-color narratives during World War II and indirectly pressured publishers to align with Cold War ideals as the superhero genre exploded. Brian Rouleau contended that such anti-communist fare during the Korean War fit within a longer history of children’s literature promoting American empire. Indeed, comics played a vital role in mythologizing World War II and the nation’s good fight abroad, even as wars like Korea and Vietnam proved less popular. But, as Gregory Daddis argued in his consideration of pulp magazines, the distance between idealized adventure and realities of war that confronted soldiers in Vietnam led to frustration, bitterness, and violence.

This final point highlights the reality that the propaganda value of comics has always been contested, not least by their own authors. Christina M. Knopf explained that military veterans in the industry wrote critically of war while still highlighting comradery amongst troops. This extended into the military revival of the 1980s, when the multimedia GI Joe empire featured a veteran-penned comic whose patriotism was more nuanced than many might remember, highlighting complex heroes whose Cobra foes were rooted in domestic extremism. Yet as the Mershon Center’s own Zaynab Quadri noted, narrative critiques of government do little to dispel the heroics central to comics and their protagonists, often individualizing or privatizing the same ideas of globe-spanning intervention that underlay the U.S. security state.