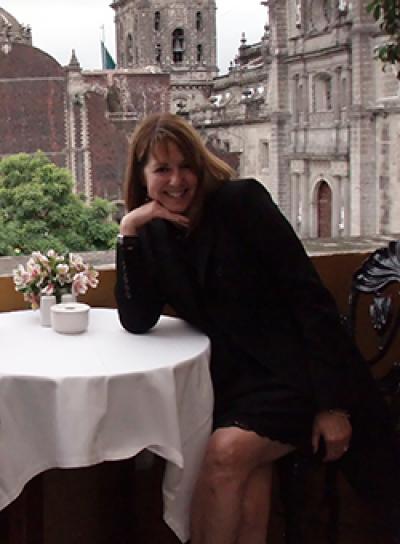 Stephanie Smith’s book project examines the interaction of radical transnational artists with the post-revolutionary Mexican state, and the critical ways in which their alliances shaped national identity throughout the 1920s, 1930s, and 1940s.

While at first glance a comparison between the artists’ leftist rhetoric and the government’s increasingly conservative policies suggest contradictory objectives, a closer analysis reveals similar goals of power, and public and private validation.

Politicians appropriated the artists’ nationalistic visual images as weapons in the propaganda war and as a system of control in their promotion of patriotic education. At the same time, the progressive artists pursued the clout and financial patronage that came from their cooperation with national and local administrators, even as their left-wing politics were at odds with government policies.

Smith argues that the volatile affiliations forged by the bureaucrats and the artists during the post-revolutionary era produced a hybrid but generally accepted notion of what it meant to be authentically Mexican.

At the core of her book is the issue of Mexico’s national security, or the ways in which the Mexican government simultaneously sought to control yet also co-opt the cultural output of the radical artists, all in the name of national/international defense.

During the post-revolutionary era many of Mexico’s most prominent artists, including Diego Rivera, Frida Kahlo, and David Alfaro Siqueiros, belonged to Mexico’s Communist Party (Partido Comunista Mexicano, or PCM).

Over time state policies shifted as various Mexican presidents and high-level administrators either compromised with the political left and the artists, or fiercely defended more conservative strategies by imprisoning or deporting anyone suspected of maintaining connections with the PCM. Mexican bureaucrats recognized the value of revolutionary art as a propaganda tool, and they courted artists with offers of financing and prestige.

The inclusion of transnational painters, photographers, and printmakers in this study also advances our understandings of international security. During the 1920s, 1930s, and 1940s women and men arrived from wide-ranging parts of the world, including the United States and Europe, to escape the growing threats of fascism, and to be a part of Mexico’s flowering cultural movement.

Significantly, these notable exiles also collaborated with many of Mexico’s printmakers and artists to create artistically and politically vital contributions to the global antifascist movement. However, as transnational artists embraced the ideology of the political left, Mexico’s internal security agents carefully monitored their everyday movements, diligently tracking their attendance at meetings as well as their trivial actions.

To understand better the transnational intellectuals, this book incorporates research from archives, libraries, and museums in five countries — Mexico, Holland, the United States, France, and Italy.

In Mexico City Smith examined documents in Mexico’s National Archives, Historical Archives of the Secretary of Education, Biblioteca Miguel Lerdo de Tejada, Center for the Studies of the Workers and Socialist Movements, Historical Archive of the Federal District, National Center for Research, Documentation, and Information on the Arts, Archivo Diego Rivera y Frida Kahlo, and Hemeroteca Nacional de México, among others.

In Amsterdam she researched at the International Institute of Social History, which holds a number of important document groups relating to Mexico.

In the United States, she worked at New York University’s Tamiment Library, Houghton Library at Harvard University to investigate the Trotsky in Exile Papers, and with the Siqueiros Papers at the Getty Research Institute.

From France she uncovered documents on Frida Kahlo in Paris at the Pompidou Center, Bibliothèque Kandinsky.

From Rome she utilized police files on Tina Modotti from the Central Archive of the State, Italy’s National Archives.

Additionally, her work benefited from documents found within the microfilm series of the Comintern Archives: Files of the Communist Party of Mexico, 1919-1940, and the National Archives and Records Administration of the United States.

A grant from the Mershon Center allowed Smith to spend two weeks at the Hoover Institute Archives, Stanford University, where she examined the papers of Joseph Freeman, founding editor of The New Masses, and Bertram David Wolfe, founding member of the Communist Party of America, both of whom spent time in Mexico. She also researched proceedings from the PCM national meeting in 1939, the Mexican collection with materials on communist and socialist organizations in Mexico, and papers related to Leon Trotsky’s time in Mexico.

Smith’s book, The Power and Politics of Art in Postrevolutionary Mexico, is slated to be published by University of North Carolina Press in December 2017.