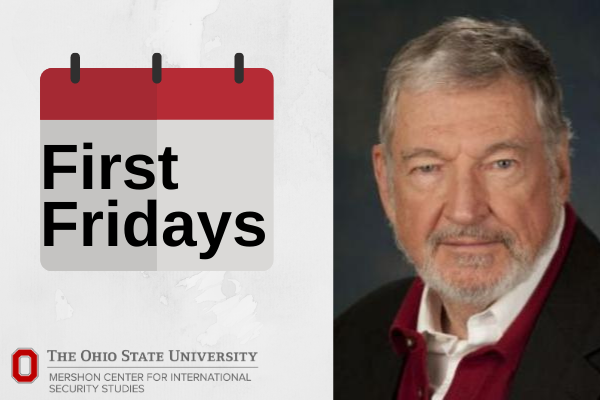 Join us for this final First Friday of the spring 2021 semester with a discussion lead by John Mueller discussing his newest book "The Stupidity of War."

In the book, Mueller argues with wisdom and wit rather than ideology and hyperbole that aversion to international war has had considerable consequences. There has seldom been significant danger of major war. Nuclear weapons, international institutions, and America’s role as a super power have been substantially irrelevant; post-Cold War policy has been animated more by vast proclamation and half-vast execution than by the appeals of liberal hegemony; and post-9/11 concerns about international terrorism and nuclear proliferation have been overwrought and often destructive. Meanwhile, threats from Russia, China, Iran, and North Korea, or from cyber technology are limited and manageable.

John Mueller is Woody Hayes Senior Research Scientist at the Mershon Center for International Security Studies, and adjunct professor of political science at The Ohio State University. He is also a senior fellow at the Cato Institute in Washington, D.C.

Mueller is currently working on terrorism, particularly the reactions and costly over-reactions it often inspires. On this topic he was written three books with risk analyst Mark Stewart: Are We Safe Enough? Measuring and Assessing Aviation Security (Elsevier, 2017), which explains how standard risk and cost-benefit analysis can be applied to aviation security; Chasing Ghosts: The Policing of Terrorism (Oxford University Press, 2016), which examines efforts by police and intelligence agencies to follow up on over 10 million tips about terrorism; and Terrorism, Security, and Money: Balancing the Risks, Benefits, and Costs of Homeland Security (Oxford University Press, 2011), which applies cost-benefit analysis to issues of homeland security.

This event is part of the Mershon Center's First Fridays seminars featuring research by Mershon Center affiliates and taking place the first Friday of each month. We welcome Mershon-affiliated faculty and graduate students, as well as the broader university community, to find out more about our work.