Is the Two-State Solution Dead? 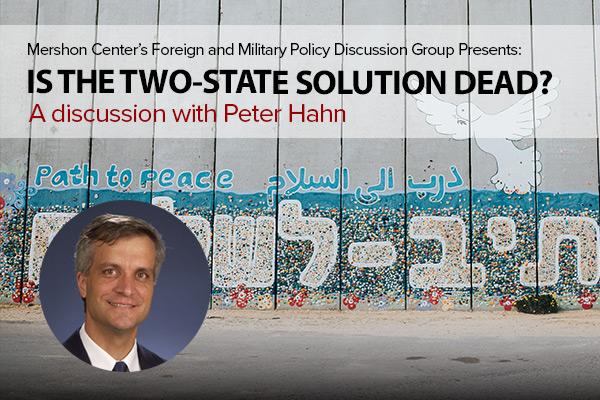 2021 witnessed a renewal of the Israeli-Palestinian Conflict, seizing the international spotlight and garnering important questions for U.S. foreign policy. Please join Dr. Peter Hahn of Ohio State's Department of History for a discussion on the question: 'Is the Two-State Solution Dead?'

Peter L. Hahn is professor of history at The Ohio State University. He served as dean of Arts and Humanities in 2015-21 and as chair of the History Department in 2006-15. An accomplished research scholar, Professor Hahn has published seven books on the history of U.S. diplomacy in the Middle East, most recently Missions Accomplished? The United States and Iraq since World War I and Historical Dictionary of U.S.-Middle East Relations, as well as scores of articles, essays, and reviews.  Professor Hahn has conducted research in the archives of the United States, Israel, Britain, and France; delivered scholarly papers and invited lectures in eleven countries; consulted with policymakers in the U.S. Departments of State, Defense, and Justice and with senior officers of the Ohio National Guard; and given interviews to the media on five continents.  In 2002-15, he served as executive director of the Society for Historians of American Foreign Relations (SHAFR), a professional society of some 1,500 members residing in 44 countries.  He was elected president of SHAFR in 2018.