What's in a Name? The Dispute over Renaming U.S. Army Bases 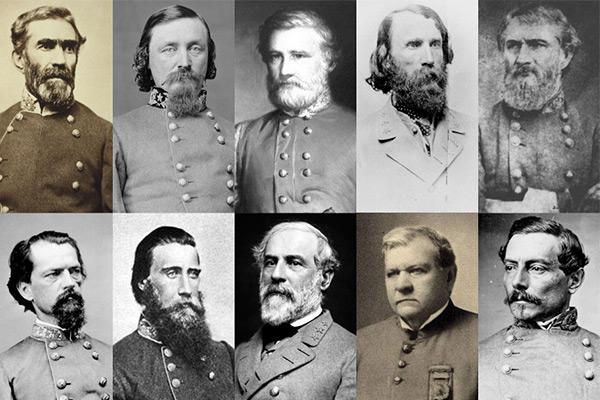 Recent protests over racial issues have rekindled efforts to rename the ten U.S. Army bases that honor officers of the Confederate States Army, plus one named after a local plantation. Please join Mershon Center for a virtual conversation about the background of the people for whom these bases are named, the Jim Crow-era politics that influenced their creation, and guidelines for selection of potential replacements.

The Zoom event link will be provided at a later time and posted to this page. If you require an accommodation such as live captioning or interpretation to participate in this event, please contact Kyle McCray, mccray.44@osu.edu. Requests made two weeks before the event will generally allow us to provide seamless access, but the university will make every effort to meet requests made after this date.

Mark Grimsley is an Associate Professor at The Ohio State University who specializes in 19th century American military history. He is the author of The Hard Hand of War: Union Military Policy Toward Southern Civilians, 1861-1865, which was awarded the Lincoln Prize, And Keep Moving On: The Virginia Campaign, May-June 1864, and is a contributing author to Warfare in the Western World. He is also the co-editor of Civilians in the Path of War (with Clifford J. Rogers) and The Collapse of the Confederacy (with Brooks D. Simpson). He is currently writing a book on the connections between the 1864 military and political campaigns for the "Pivotal Moments in American History" series, published by Oxford University Press.

Hasan Kwame Jeffries an Associate Professor at The Ohio State University who specializes in African-American history. He is the author of Bloody Lowndes: Civil Rights and Black Power in Alabama’s Black Belt. His current book project, entitled Stealing Home: Ebbets Field and Black Working Class Life in Post-Civil Rights New York, explores the struggle of working class African Americans to secure and enjoy their freedom rights, from the height of the civil rights era through the present, by examining the experiences of the residents of Ebbets Field Apartments, an expansive, 1,200 unit, affordable housing complex built in 1962 on the site of old Ebbets Field, the former home of Major League Baseball’s Brooklyn Dodgers.

Peter Mansoor is the General Raymond E. Mason Jr. Chair of Military History at The Ohio State University and a senior faculty fellow at the Mershon Center for International Security Studies. He assumed his current position in 2008 after a 26 year career in the U.S. Army that included two combat tours in Iraq. He is the author of The GI Offensive in Europe: The Triumph of American Infantry Divisions, 1941-1945, which was awarded the Society for Military History and American Historical Society book of the year awards; Baghdad at Sunrise: A Brigade Commander’s War in Iraq, which was awarded the Ohioana Library Association book of the year award; and Surge: My Journey with General David Petraeus and the Remaking of the Iraq War, which was a finalist for the inaugural Guggenheim-Lehrman Prize in Military History. He is also the co-editor of four volumes, including the recently published The Culture of Military Organizations (with Williamson Murray). He is currently working on a campaign history of the liberation of the Philippines during World War II.

Jennifer Siegel (panel chair) is a Professor of History at The Ohio State University and a senior faculty fellow at the Mershon Center for International Security Studies. She specializes in modern European diplomatic and military history, with a focus on the British and Russian Empires. She is the author of For Peace and Money: French and British Finance in the Service of Tsars and Commissars and Endgame: Britain, Russia and the Final Struggle for Central Asia, which was awarded the 2003 AAASS Barbara Jelavich Prize. She has published articles on intelligence history, and co-edited Intelligence and Statecraft: The Use and Limits of Intelligence in International Society. Her current research projects include an exploration of the diplomacy of the First World War and a project on Allied intelligence in WWI occupied Belgium.