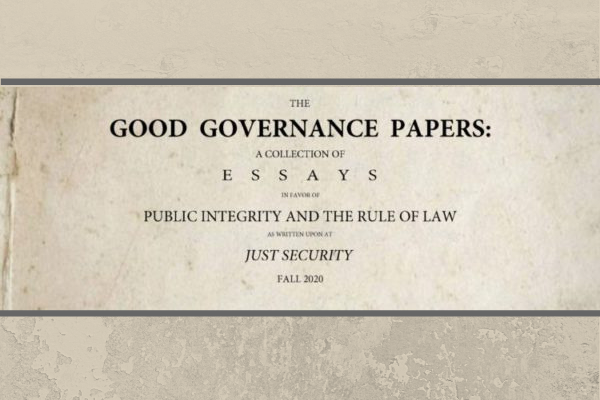 Mershon Center Senior Faculty Fellow Dakota Rudesill is co-organizer and co-editor of a series of timely essays now being published at Just Security addressing norms of good government, ethics, and the rule of law which have been violated in recent years. The essays are entitled The Good Governance Papers.  They are authored by a bipartisan and interdisciplinary group of experts, and address urgent national security-related reforms through actionable, nonpartisan proposals. The essays are currently being published daily through Oct. 31 and will ultimately become an edited volume.  Topics include domestic use of military force, lawful and unlawful orders, intelligence, congressional oversight, classified information, foreign election interference, investigating the President, nuclear weapons, and more.

Catch The Good Governance Papers as they publish here.

The Good Governance Papers: An Introduction

Today Just Security launches the Good Governance Papers, a series of concise essays exploring actionable legislative and administrative proposals to restore and promote non-partisan principles of good government, public integrity, and the rule of law. The short essays will cover a range of urgent national security-related reforms. The Mershon Center for International Security Studies is pleased to partner in this initiative.

This project is a response to one of the most worrisome developments of recent years. Many well-established principles and traditions that long restrained public officials of both parties have been laid bare either as merely norms that cannot constrain those who would purposefully flout them or as law that the courts, Congress, or the U.S. Department of Justice and other federal agencies are not adequately enforcing. In addition, unchecked abuse of authority, self-dealing, disregard for the law, and other inappropriate government action has exposed gaps and ambiguities in existing legal frameworks. Many of these problems are particularly troubling in their national security implications.

These developments call for an urgent response to fill the gaps as well as tighten and strengthen an array of laws and regulations promoting good government, checks and balances, ethics, and the rule of law.

While many shortcomings in existing legal frameworks have become glaringly evident since 2016, many of them—or their root causes—long predate the Trump era. Indeed, the Good Governance Papers eschew partisan perspectives in an effort to promote norm-repairing reforms on which supporters of high standards in governance can, in general, agree. With the election of a new Congress and a new presidential term on the immediate horizon, the time is ripe for an informed, analytical, solutions-oriented discussion regarding how we as a nation might begin to formulate and implement such institutional changes.

The good news is that the discussion has already begun in many ways. Regular invocations in the mainstream media of formerly obscure corners of the law such as the Hatch Act, Insurrection Act, and the Emoluments Clauses of the Constitution, as well as norms such as the independence of the Department of Justice or the non-partisan administration of the security clearance process are evidence of an urgent and widespread desire to see our government recommit itself to good governance, public integrity, and the rule of law. Many commentators have identified and offered analysis of one or another means of pursuing this goal. The Good Governance Papers seeks both to expand and render more concrete this discussion by collecting in one place a ready list of non-partisan, carefully crafted, specific reform proposals. Each short essay will identify an area of concern and propose a means of addressing that concern, including through presenting model legislative or regulatory texts where applicable.

Our bipartisan group of contributors to the Good Governance Papers are leading thinkers in national security, ethics and public integrity, congressional and executive oversight, human rights, and more. They will speak only for themselves, and every contributor and editor may not agree with every proposal. But their recommendations will generally align with this project’s goals of reinforcing vital governance norms and warrant careful consideration.

It is our hope that the contributions will help to chart a path out of the troubled waters in which the United States finds itself. Despite our nation’s partisan divisions, a surprisingly broad consensus has grown among legal experts of different ideological stripes and affiliations that the norms and principles to which government officials traditionally have adhered require reinforcement or codification. We therefore find ourselves at a unique moment in which policymakers can draw on this consensus to embed in law some of the better traditions that have evolved over the nation’s first two centuries in order to ensure that America—and the principles for which it stands—endures. The Good Governance Papers attempts to help illuminate the path forward. Thank you for reading.