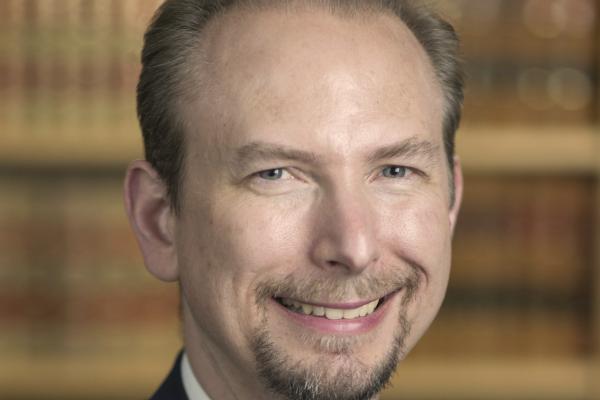 Mershon faculty affiliate Dakota Rudesill, a leading expert on national security law and policy, will receive the 2019 Sidney D. Drell Academic Achievement Award from the Intelligence and National Security Alliance (INSA) at a ceremony at the U.S. Institute of Peace in Washington, D.C. on February 21.

INSA networks and mentors national security professionals, particularly in the intelligence world, and convenes experts to study cutting-edge issues. The organization gives out several awards each year. Deemed a “champion of next generation leaders” by the INSA, Rudesill is the first law professor to receive the prestigious Sidney D. Drell award.

“A sizable number of academics in other disciplines study national security and intelligence,” Rudesill said, “but you can count the number of law professors nationwide who have served inside the U.S. Intelligence Community on one hand. National security law and well-trained practitioners of integrity are how constitutional values are made meaningful even in classification’s darkest corners, and I am so honored that the experts in my field at INSA chose to recognize my work.”

Before joining Ohio State as an assistant professor of law in 2013, he spent nearly nine years immersed in national security legislative work, including on the professional staff of the U.S. Senate Budget Committee. He is also a former member of the Obama-Biden Presidential Transition Team, where he advised the president’s nominees for Director of National Intelligence and CIA Director. He has served in the Office of the Director of National Intelligence (ODNI), on the president’s Detention Policy Task Force at the U.S. Department of Justice, as a law firm associate, federal appellate law clerk, and as a think tank fellow as well.

The Sidney D. Drell Academic Award is named for Dr. Sidney D. Drell (1926-2016), a groundbreaking theoretical physicist, advocate for nuclear arms control, and expert advisor to presidents of both parties on satellite reconnaissance and other advanced intelligence programs.

Mershon's Peter Mansoor, General Raymond E. Mason, Jr., Chair of Military History at Ohio State, was one of several people who nominated Rudesill for his “exemplary contributions to education at Ohio State in national security and intelligence in terms of teaching, scholarship, and service.”

In his recommendation letter, Mansoor emphasized Rudesill’s leadership in creating The Ohio State National Security Simulation, a two-day, real-time, interdisciplinary training program involving more than 130 participants, including students from across campus and practitioners from around the country. The simulation also instills “ethical values of integrity, good process, respect for the rule of law, and respect for human rights,” Mansoor wrote in his letter.

Rudesill’s scholarship was another factor in receiving the award, most recently, his 2018 law review article “The Land and Naval Forces Clause,” which traced the constitutional history and explored the contemporary meaning of a constitutional provision that gives Congress power over the national security and intelligence agencies.

His article on the constitutional provision, according to a second nomination letter written by David Koplow of Georgetown Law, “provides the definitive scholarly exploration” of Congress’s authority to legislate “the heart of the national security legal regime” that constrains the president and controls espionage and surveillance. Koplow also noted Rudesill’s “position as one of the leading legal scholars today writing about nuclear weapons,” and his “cutting-edge scholarship” on unpublished law, often called “secret law.”

“I am enormously humbled to be nominated by senior colleagues I respect so deeply,” Rudesill said. More than 90 of his former students also signed a letter in support of the award, praising his innovative teaching, mentorship and job placement efforts. “I am most moved by the outpouring of support from my students,” he added.

This story originally appeared in Briefing Room at Moritz College of Law.