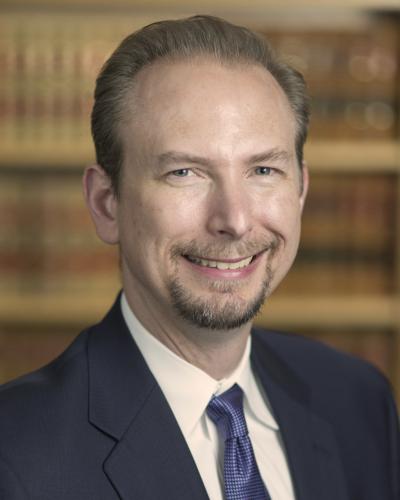 Stepping into the shoes of lawyers, policymakers, intelligence analysts, and reporters, the students dealt with a series of realistic national security crises ripped from the headlines. They had to apply law, policy and facts they had learned in class to navigate the simulation’s outcome.

The Ohio State University National Security Simulation explored decision making in federal executive and legislative branches at the intersection of law and policy regarding national security, under crisis conditions. It was an open-universe, dynamic, immersive simulation that moved in real time over 48 hours. Students had agency, and their decisions dictated outcomes for the story lines.

Participating in the simulation were Mershon Center faculty affiliates Peter Mansoor, who played the president of the United States, and Peter Shane, as well as Mershon graduate student affiliates Daniel Curzon, Rudy Hightower, and Will Waddell. Throughout the event, Rudesill drove the players toward particular issues and dilemmas.

Chief Judge James E. Baker of the U.S. Court of Appeals for the Armed Forces and former legal advisor to the National Security Council, gave the keynote address, emphasizing the importance of integrity and good process in decision-making.

Several experienced Washington practitioners including former members of the military and National Security Council played the roles of senior government officials, giving students the experience of working with seasoned leaders with high expectations.

Besides facilitating cross-pollination at Ohio State and acting as a final exam for students in Rudesill’s National Security Law class, the simulation also built practical skills that are transferrable to any kind of legal, policy or military situation.

These skills include spotting, appraising, and using facts, legal authorities, and processes; developing and appraising options; working in teams; advising leaders and making decisions; exercising judgment and integrity under pressure; protecting confidential information (including but not only its particular national security variety, classified information); and showing adaptation and resilience as the facts, policy, and law change.