It’s 9:53 on Saturday morning and Dakota Rudesill is about to cause an earthquake in San Francisco. That’s bad. The North Korean nuclear missile test coming next 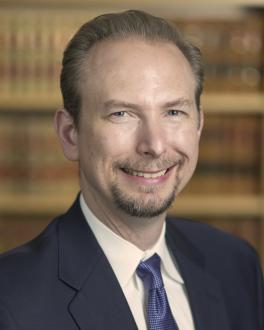 Welcome to the Ohio State National Security Crisis Simulation. The simulation is a two-day exercise at The Ohio State University that immerses students from law, policy, intelligence and media in real-world roles as they confront a seemingly never-ending series of crises.

Rudesill, a law professor at the Moritz College of Law, is the simulation’s architect, instructor and puppet master. He and a control team operated behind closed doors, injecting chaos at every turn to challenge the students to work through problems.

And the problems are legion. Over the course of the simulation last week, the crises included terror attacks, natural disasters and cyber warfare. The examples are often drawn from real life.

“If while we’re working through the issues we are coming up with today, we come up with a brilliant policy response or legal response to something, that’s wonderful,” Rudesill said. “But what this is really about is professional skills development.”

A roster of real-world experts advise the students throughout the simulation. Senate President Larry Obhof, former Congresswoman Mary Jo Kilroy and journalist Philip Bump were some of the professionals guiding the students from crisis to crisis.

Bump, national correspondent for the Washington Post, mentored student journalists working to report on all of the events occurring in the simulation. The School of Communication has had dozens of students participate in the simulation since its creation.

“I didn’t have to adopt a persona. My job was to have a team of folks figure out what the news stories were,” he said.

“I think confidence was the biggest take-away. Having Philip Bump there to push you to ask questions and not take any excuses meant a lot,” Vunak said. 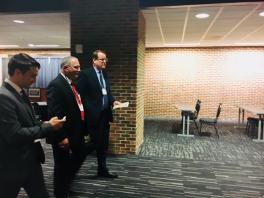 Katie Grammenidis, a second-year law student, played counsel for the governor of California.

“I think this was a good lesson in staying calm and learning to talk to different actors. I think on the first day there was a very heightened sense of emotions,” Grammenidis said. Working through those emotions at a fast pace was a learning experience.

At one point, the students charged with role-playing the legislative branch failed to get a bill out of committee. Rudesill, who in his career has advised senior leaders in all three branches of the federal government, compared it to a prizefighter who is knocked out in training.

“It really exposes all of us to how complicated the national security decision-making process is,” said Jeff Rogg, a graduate student who helps Rudesill manage the planning and implementation of the simulation.

Rogg has participated in simulations similar to the one run at Ohio State. He said it compared favorably to other universities and events run by the military when he served.

Students and participants immersed themselves in their roles and often executed very challenging assignments. By the end of the second day, students averted nuclear war, passed a congressional spending bill and halted an armed insurrection. And learned some valuable lessons.

“You can’t learn here without taking it seriously,” Rudesill said.