Building Peace: A Conversation Between Academics, Policymakers, and Practitioners 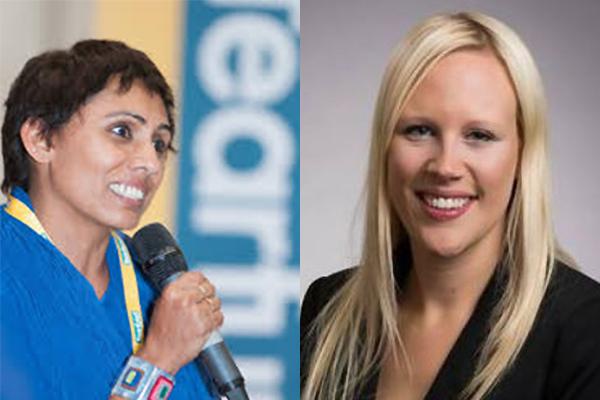 Please join us for a "fireside chat" lunch conversation between academics, policymakers, and practitioners on "Building Peace." At this event, Mershon Center Peace Studies Coordinator Teri Murphy will interview Hollie Nyseth Brehm (right in photo), associate professor of sociology, and Veena O'Sullivan (left in photo), head of thematic support for Tearfund, about their experiences of collaborating with researchers, policymakers, and practitioners in the understanding and building of peace.

They will be discussing the differences in agendas, priorities, and timelines of these parties, what constitutes "evidence," and how to work more effectively together. After the fireside chat, attendees will break into small groups to further discuss the challenges and opportunities of building cross-institutional partnerships.

This fireside chat is part of a Mershon Center working conference on "Exploring Obstacles to Social Cohesion in the Aftermath of Violent Conflict." The event will allow conference participants to interact with Mershon affiliates as well as members of The Ohio State University and broader Columbus community.

Hollie Nyseth Brehm is an associate professor of sociology and criminology at The Ohio State University. She studies community-level dynamics of genocide, transitional justice, and the reentry and reintegration of people who commit mass violence. She has co-founded two nonprofits focused on refugee education, serves on a government violence prevention task force, is on the advisory board of the International Association of Genocide Scholars and I-Activism, and works with several peace research organizations in Rwanda.

Veena O'Sullivan has been involved in facilitating people movements to address issues of social injustice for the last 24 years. Originally from India, she started her work with people living with HIV and AIDS which led to facilitating a powerful movement of women affected by sexual violence. More recently she has been accompanying grassroots peacemakers as a co-lead for Tearfund’s response in conflict affected and fragile states. She is the founder of We Will Speak Out, a faith movement working to end sexual violence and the Gender Based Violence Hub at the Joint Learning Initiative of faith and local communities.

Teri Murphy has been actively engaged in conflict intervention and peacebuilding in international contexts for the past 25 years. As a scholar-practitioner, her applied research and practice has taken place in Afghanistan, Northern Ireland, Turkey, and several countries in Africa. Her particular focus has been on transitional justice processes and the intersection of peace, human security, and development. She recently helped launch the Conflict to Peace Lab at The Ohio State University and serves as one of its co-directors.

The Conflict to Peace Lab (C2P) is a research initiative of the Mershon Center for International Security Studies at The Ohio State University. C2P develops evidence-based evaluations of policy and intervention models that support international peacemaking, peacebuilding, and social cohesion in fragile states affected by war and political violence. We identify innovative policy evaluations for research in conflict affected areas, placing priority on conflict sensitivity and cultural appropriateness. Our goal is to produce knowledge that is useful to local communities impacted by violence, accessible to policy makers, and practitioners, and compelling to the scholarly community.