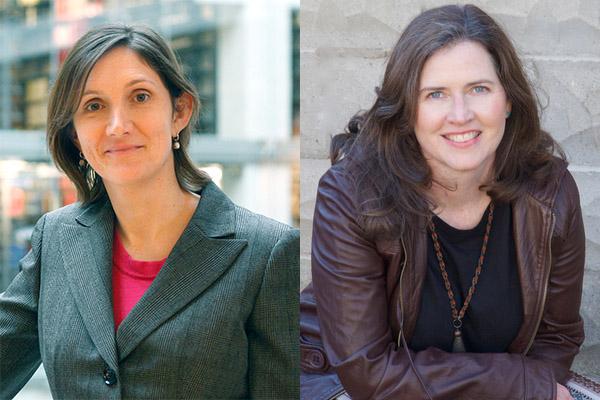 On April 16, 2019, the College of Arts and Sciences hosted its fourth annual Spring Recognition Ceremony, honoring the recipients of endowed college awards and college-wide awards for teaching and mentoring in the Arts and Sciences.

Among those honored were Kendra McSweeney, professor of geography, who was named Joan N. Huber Faculty Fellow, and Margaret Newell, professor of history, who received the Harlan Hatcher Arts and Sciences Distinguished Faculty Award.

McSweeney’s current projects include tracing the socioecological impacts of drug trafficking through Central America and studying the nature and implications of demographic change among Latin America's indigenous populations. She began this work with a 2012 grant from the Mershon Center.

As one nominator said, "Professor McSweeney has delved into an issue of great societal importance, reached far beyond the academy to communicate its implications, and raised up many of her collaborators along the way with her efforts … exemplifying the spirit of outstanding research in social and behavioral sciences."

Newell's past and present research has reshaped slavery studies, Native American history, and the history of capitalism in the Americas. Her 2015 book, Brethren by Nature: New England Indians, Colonists, and the Origins of American Slavery, received two national awards and has been called "a book that virtually defines a field." She began research on that book with a 2006 grant from the Mershon Center.

The Joan N. Huber Faculty Fellow award recognizes first-rate scholarship for individuals not already so recognized by virtue of being an Eminent Scholar, holder of a chair, a Distinguished University Professor or a Distinguished Scholar. No more than three fellowships are awarded each year to full professors.

The Harlan Hatcher award recognizes a full professor who has a truly exceptional record in teaching, research and service. The award was established with gifts from Mrs. Anne Hatcher and her family, in honor and memory of Dr. Harlan Hatcher, an alumnus and former dean of Arts and Sciences at The Ohio State University.

"This ceremony honors and celebrates our colleagues as teachers, mentors, scholars, leaders and advocates of inclusive excellence," said Janet Box-Steffensmeier, interim executive dean and vice provost of the College of Arts and Sciences. "It's their commitment to inspiring our students, building an inclusive and connected academic community and using their diverse experiences and knowledge to solve problems on campus and to ignite a lifetime of learning for our students."